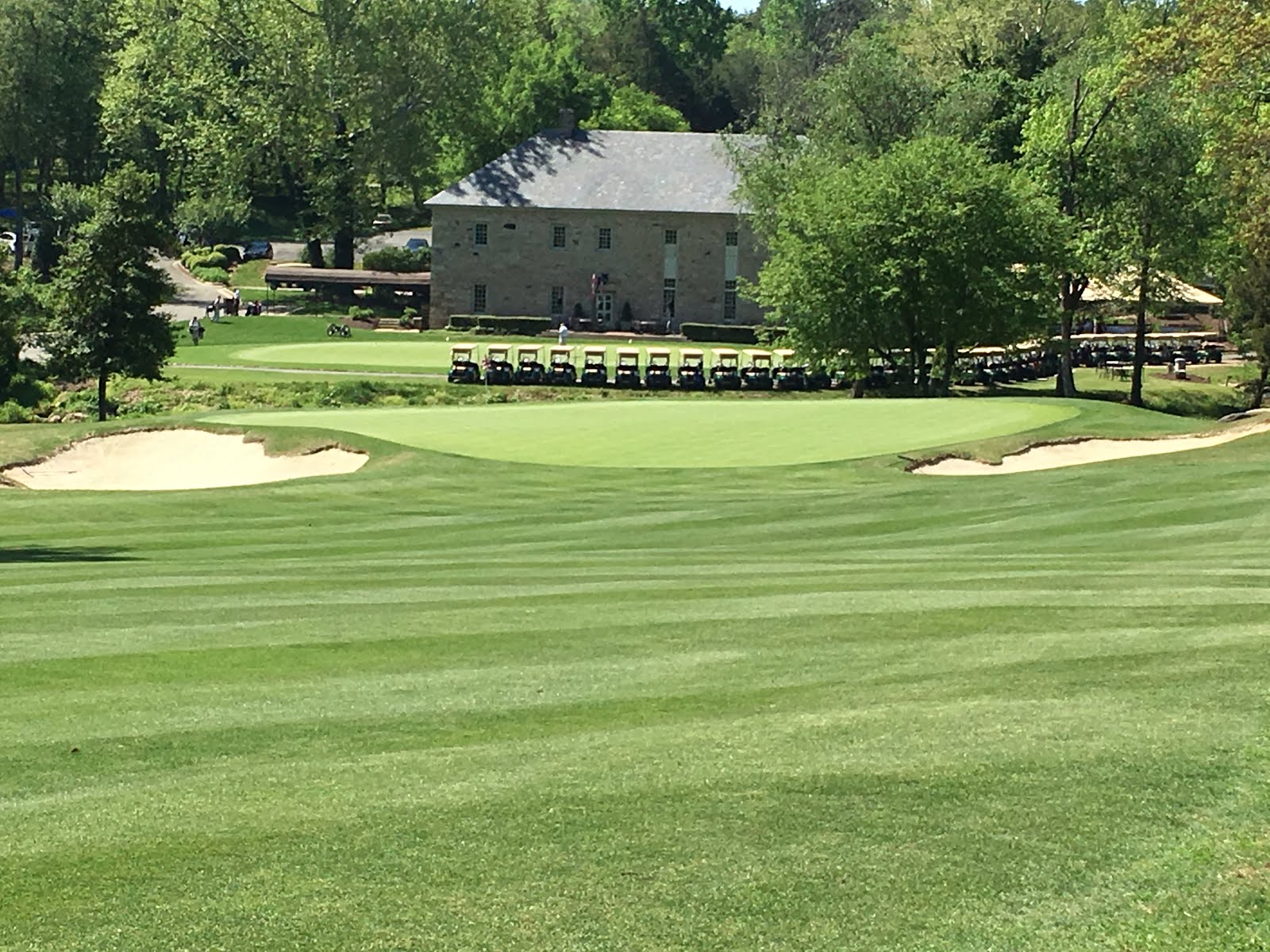 Getting a handle on pythium root dysfunction
by John Reitman


A fungicide program along with regular aerification and topdressing can help ward off this disease that targets new stands of bentgrass
A variety of words come to mind when the subject of pythium root dysfunction arises. Although none of those words is particularly nice, among the ones that at least are fit to print are frightening, frustrating, dreaded, debilitating and even ironic.

Caused by the pathogen pythium volutum – at least in the Southeast – pythium root dysfunction is a fungal disease that attacks the roots of creeping bentgrass, limiting its ability to extract water and nutrients from the soil. It is not found on old or compacted greens that one might typically associate with disease pressure. Instead, it targets those greens that many golfers covet, primarily those that are less than 10 years old and have been constructed on well-draining, sandy soils. In fact, the same conditions that make sand-based greens susceptible to other diseases – a porous profile and aggressive management practices – also make bentgrass putting surfaces prime for outbreaks of pythium root dysfunction.

“In sand-based putting surfaces it is not unusual for them to percolate 20 inches an hour to maintain a firm putting surface,” said Lane Tredway, Ph.D., turfgrass pathologist at North Carolina State University and a leading author on pythium root dysfunction. “The problem is, if the putting surface is moving water that fast then it’s not holding any water at all, or any nutrition either.

“Pythium volutum results in damage to the roots and makes the plant more susceptible to drought. It just can’t survive.”

Despite its relatively recent appearance on golf course turf, pythium root dysfunction is a disease for which there exist preventive and curative control options, namely a rotational fungicide program and management practices that alleviate stress to the turf, possibly including a routine of reduced mowing coupled with lightweight rolling.

Although no rolling research has been conducted with pythium root dysfunction in mind, many who have studied the effects of rolling believe that promoting better overall plant health through mowing less and rolling more is a win-win situation that can help protect turf against many diseases.

“I would agree with that,” said John Sorochan, Ph.D., of the University of Tennessee. “For a disease to be a problem it needs a susceptible host. By implementing a mowing/rolling program you can maintain healthier bentgrass, and it becomes less of an ideal host for this disease.”

Adding to the contradictory nature of pythium root dysfunction are the preventive steps that researchers who have studied the disease recommend for minimizing the chances that it manifests on a new – and expensive – putting green. Although it is found on fast-draining, sand-based greens, more topdressing as well as punching holes in the surface are recommended.

Tredway specifically suggests a program of hollow tining in the spring and fall, accompanied by use of solid tines during the summer, as well as light, frequent topdressing applications.

“That seems counterintuitive since (pythium root dysfunction) is more severe in sandy soils and well-aerified situations,” Tredway said. “The problem with some of the newer bents is that the topdress is so dense that the surface seals up quickly and there is not enough oxygen in the soil profile, so the roots have a hard time persisting in hot weather.”

First observed in the late 1970s in parts of Canada and the Northern Plains, pythium root dysfunction is caused by different pathogens in different parts of the country (pythium arrhenomanes and pythium aristosporum were documented as pathogens inducing PRD in the Midwest and Mid-Atlantic). The pathogen that causes pythium root dysfunction in the Southeast – where it still is a relatively new disease – typically infects bentgrass roots during warm, dry periods in the spring, fall or winter.

Symptoms of infestation, which comprise circles or patches that range in size from a few inches to a few feet in diameter, do not manifest until summer after being prodded along by additional stress factors such as low mowing heights, searing heat and traffic on a surface maintained with little water and even less fertilizer. By then, roots have died back and root hairs –which the plant needs to absorb water and nutrients – have all but disappeared. Infected roots begin to dieback rapidly when soil temperatures exceed 85 degrees Fahrenheit.

“Among the major factors at play are that superintendents are not irrigating or fertilizing enough,” Tredway said. “It’s a recipe for disaster.”

According to university research, fungicides typically used to control standard pythium have resulted in poor control of pythium root dysfunction when used alone. Researchers at North Carolina State recommended – for golf courses in the Southeast – a rotation of pyraclostrobin (BASF’s Insignia) and cyazofamid (FMC’s Segway), both applied at a rate of 0.9 ounces per 1,000 square feet, as well as a combination of Signature and Banol (4 ounces plus 2 ounces per 1,000) or Signature and Subdue Maxx (4 ounces plus 1 ounce per 1,000) to reduce the threat of resistance. Preventive treatments were applied every 21 to 28 days in the fall and spring when soil temperatures were between 50 degrees and 75 degrees. Curative applications were made every 14 days to 28 days depending on the severity of the outbreak, according to research.

Research conducted at several universities, including Michigan State, Rutgers and Tennessee, have shown that mowing three to four times per week and rolling daily can leave putting surfaces less susceptible to diseases such as dollar spot and anthracnose.

Although no research as been conducted that measures the effects of reduced mowing and lightweight rolling on pythium root dysfunction, many agree that any management practice that results in a healthier plant could help ward off diseases like PRD.

“We don’t have any data to prove that, but it makes common sense,” Tredway said.

“The key thing is to alleviate stress. What you are seeing in the turf are signs of stress.”

Nikolai also noted in an e-mail that his early rolling research showed that rolling as little as three times per week led to increased root mass compared with the control plots.

Tennessee’s Sorochan has conducted extensive research on the effects of lightweight rolling on putting surfaces, including some with Nikolai.

“It’s not a silver bullet, but it is another tool to improve the quality of greens,” he said.
“I think Dr. Nikolai’s point was to show at what point are you killing turf, and it didn’t happen. I don’t know if there is such a thing as rolling too much. . . . I would recommend rolling, and rolling often; even multiple times per day. People think it’s crazy, but the data doesn’t lie.”
- Paul Giordano, graduate student at Michigan State University
As a graduate student at Michigan State studying under Nikolai and Joe Vargas, Ph.D., Paul Giordano is preparing to defend his thesis on the effects of rolling on disease incidence – specifically dollar spot. He contends plants that are permitted to age – even by two days or so – more than daily mowed plots exhibit more natural disease resistance, and that a regular rolling regimen (with less frequent mowing) could help in the battle against pythium root dysfunction as well as other diseases.

His research indicates that rolling results in higher bacterial populations that could compete with fungal pathogens for food sources or even attack pathogens in soil-dwelling diseases.

And for those who fear regular rolling might lead to compacted greens, research at MSU shows that rolling as often as eight times per day resulted in improved turf quality compared with plots rolled daily or twice per day.

“I think Dr. Nikolai’s point was to show at what point are you killing turf, and it didn’t happen,” Giordano said. “I don’t know if there is such a thing as rolling too much.

“I would recommend rolling, and rolling often; even multiple times per day. People think it’s crazy, but the data doesn’t lie.”
Posted by foundryturf at 9:35 AM